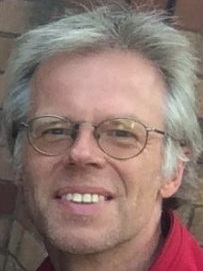 Institute: Helmholtz Centre Potsdam, GFZ German Research Centre for Geosciences
Title: Senior Researcher
Country: Germany
Period: 2017/07/01 - 8/4, 8/21 - 9/3
Theme: Models of mantle flow associated with the Hawaii-Emperor Bend
Host: Kiyoshi BABA
Introduction: I am a geodynamic modeller working at the GFZ German Research Centre for Geosciences in Potsdam. My research is mostly concerned with mantle flow modelling, and how various observations such as geoid, topography and lithospheric stresses can be used to constrain such models. Some of my specific research interests are mantle plumes, their generation and interaction with large-scale mantle flow and the lithosphere - in particular spreading ridges, the relation of mantle flow and plate motions - especially devising absolute reference frames for the motion of plates over the mantle, how mantle flow causes uplift and subsidence of the surface (so-called dynamic topography), and how the re-distribution of masses inside the Earth due to mantle flow changes the orientation of the entire Earth relative to its spin axis (so-called true polar wander).
During my stay at ERI I plan to work on numerical models of the Hawaiian plume and its interaction with the Pacific lithosphere during the time when the Hawaii-Emperor bend formed. This bend in the Hawaii-Emperor hotspot chain was probably caused by a major change in motion of the Pacific plate over the Hawaii plume, but the hotspot probably also moved southward, in particular during formation of the Emperor Chain. I plan model a number of cases, in order to test what kind of structure, in terms of seismic velocity and anisotropy, and electric conductivity, related to the plume-plate interaction, could still be preserved in the mantle beneath the Hawaii-Emperor bend. Ideally, comparing model predictions with observations, which should be obtained through a planned project, will help to constrain properties of plume and plate.
I am looking forward to coming back to Japan more than 13 years after living there, meeting many of my former colleagues, and some new ones as well, and working with some of them.
Fiscal Year: 2017