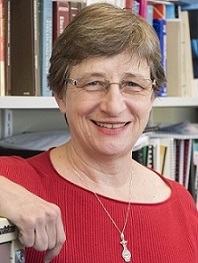 Institute: Institute of Geophysics, School of Earth Science, Victoria University of Wellington
Title: Professor
Country: New Zealand
Period: 2016/10/11 - 2017/1/19
Theme: Developing new ways to monitor cracking in the Earth
Host: Yosuke AOKI / Kimihiro MOCHIZUKI
Introduction: Born in the United States, I now also hold New Zealand citizenship, and am Professor of Geophysics at Victoria University of Wellington (VUW). In the US, I completed a BA in Physics at Swarthmore College and an MSc and PhD in Geophysics at University of Wisconsin-Madison, and worked as a Research Professor at University of Nevada-Reno before moving to VUW in 1995. I became a Fellow of the Royal Society of New Zealand in 2011 and a Fellow of the American Geophysical Union in 2015. My research interests include seismology and its relation to tectonics and to earthquake and volcanic hazards and geothermal energy.

I am very pleased to be back at ERI to work on two projects that include using, testing and developing new methods to determine Earth structure and to monitor cracks in the Earth by using the variations in wave speed with direction. With Assistant Professor Yosuke Aoki I will be developing this tool to study recent eruptions of Ontake volcano and the interaction of volcanic activity at Aso and earthquakes during the recent Kumamoto earthquake sequence. With Associate Professor Kimihiro Mochizuki I will be examining structure and anisotropy from data on joint projects on the East Coast of New Zealand’s Hikurangi subduction margin. We will be using data we collected above the subduction zone in the Wellington region, which appears to be “locked”, with no recent movement, and in another region offshore of Gisborne, that undergoes periodic “slow slip” activity. Understanding the differences and similarities of stress and cracking in these areas, and how the cracks change with time, may help us to determine what causes some areas to be locked and others to slip slowly, and whether the different slip behaviours will lead to differences in the occurrence of very large earthquakes. It may also allow us to study the deeper behaviour of bottom of the lithospheric plate as it moves above the asthenosphere.
Fiscal Year: 2016