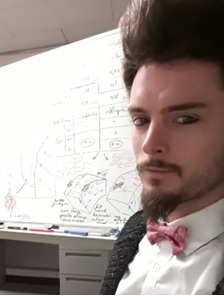 
With a double MSc in geophysics (EOST Strasbourg, 2012) and geology (ENSG Nancy, 2013), I got my PhD from ENS Paris (PSL Research University) in 2017. Under the direction of Alexandre Schubnel (CNRS/ENS Paris) and Nadège Hilairet (CNRS/UMET Lille), I reproducted mantle earthquakes analogues by antigorite dehydration and compared them with a natural fossil occurrence (Ferrand, 2017). First I demonstrated that a Dehydration-Driven Stress Transfer (DDST) in olivine-antigorite samples triggers micro-earthquakes and pseudotachylytes generation, i.e. rupture-induced total melting (Ferrand et al., 2017), and then I evaluated the energy balance of a natural pseudotachylyte in the spinel lherzolite of Balmuccia (Ferrand et al., 2018). Especially, I used Raman spectroscopy to track amorphous material in the damage zone to estimate its water content.


I am interested in large-scale geological processes. The understanding of time and space evolution of local- to earth-scale events motivates my work. I like broaching complex systems in a simple way.


I have proposed an alternative model to dehydration-embrittlement in which “Dehydration-Driven Stress Transfer” (DDST; Ferrand et al., 2017), rather than fluid overpressure, causes embrittlement. Comparing experimental and natural Gutenberg-Richter laws, the DDST model has recently been tested for seismological data from the Pacific slab beneath Tohoku and Hokkaido and confirmed as the most accurate to explain lower Wadati-Benioff events (Kita & Ferrand, submitted).


My current project is called TROPICO for “Transforming Olivine: Plasticity and Induced Crystallographic Orientation”. I will use Ge-olivine to look at the impact of its phase transition on mantle rheology, strain localization, crystallographic orientation and earthquake triggering. With Professor Takehiko Hiraga, I will strengthen the material-science part of my skills mix and, hopefully, take a picture of hypocenter deformation as it localizes just before seismic rupture nucleation. Together, we should be able to question (ultra)mylonites formation and investigate (super)plastic behaviour of mantle analogues due to mineral transformations.
Fiscal Year: 2018