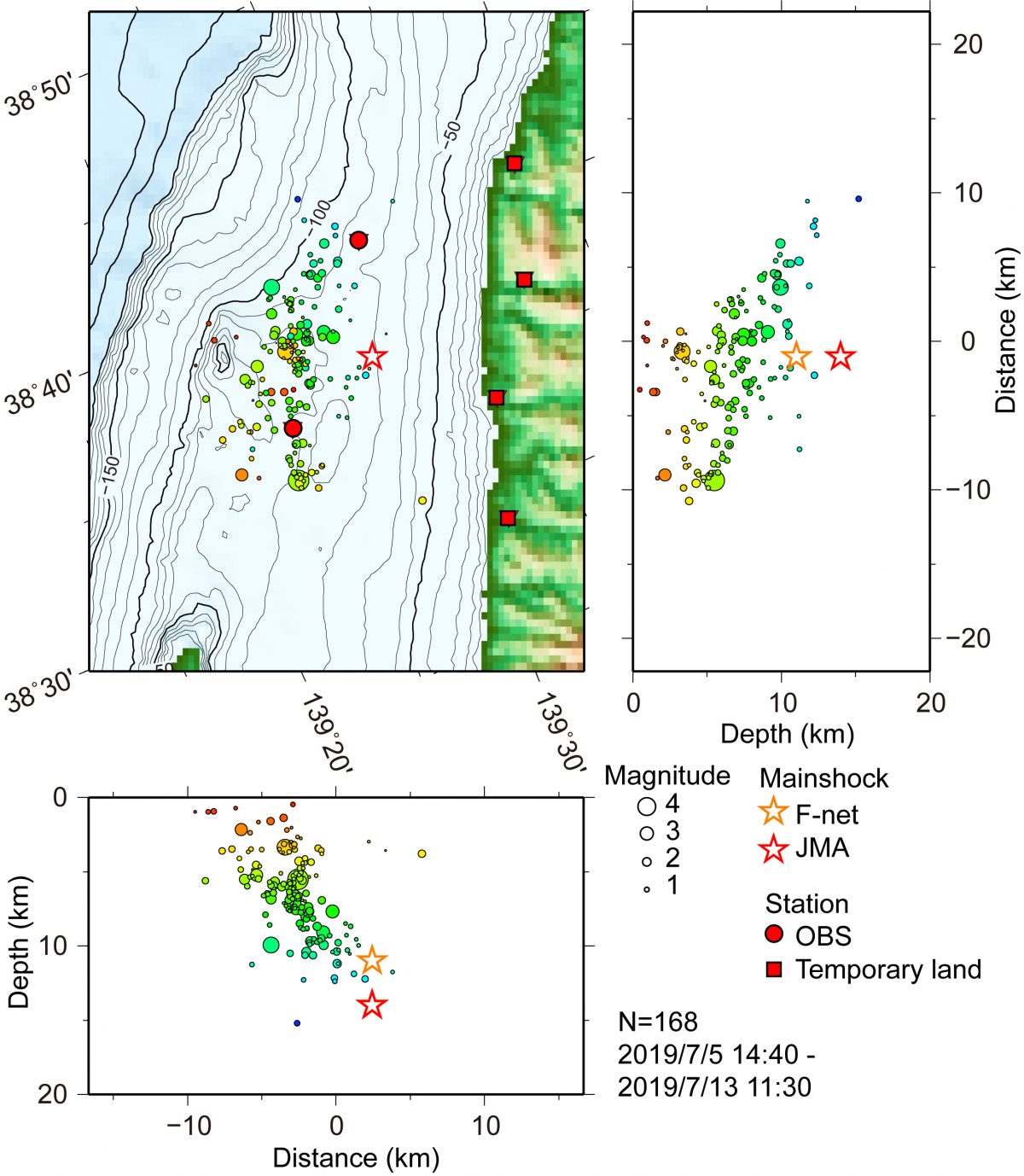 *All figures/pictures/movies should be credited as: “Earthquake Research Institute, The University of Tokyo” when cited.

We carried out a seafloor observation of aftershocks just above a source region of the earthquake (Mw 6.4) occurred off Yamagata Prefecture on June 18th, 2019. Because the seafloor above the source region has shallow depths, we have developed a new handy seafloor seismic observation system using anchored buoy. The observation period is from 5th to 13th, July. Temporary land seismic stations were installed on the coast of Honshu. We could obtain precise aftershock distributions using the marine-land seismic network. As a result, almost all the aftershocks have depths between 2 km and 12km, and the aftershocks form a plane dipping toward southeast. The dipping plane is inferred to represent the source fault of the mainshock. We acknowledge the cooperation of local fishery group. This observation was carried out with Tohoku University and Kyoto University as a part of Earthquake and Volcano Hazards Observation and Research Program (2nd).

Simulation of seismic wave propagation for the M6.7 Off Yamagata earthquake of 18 June 2019
（Shunsuke TAKEMURA and Takashi FURUMURA）

To investigate properties of the seismic wave propagation during the 2019 Off Yamagata earthquake (M6.7) of 18 June 2019, we conducted a numerical simulation of seismic wave propagation by using a source model of the NIED AQUA CMT and a 3D subsurface structure model (Fig. 1). The simulated seismograms for periods of 12.5-100 s agreed well with observed ground motions at F-net stations (Fig. 2). Simulated seismic wavefield demonstrates that strong ground motions spread from the seismic source to east-southeastward and west-northwestward directions due to effect of source radiation pattern. Then, strong amplifications and elongation of ground motions occurred in thick sedimentary basins (e.g., Toyama, Niigata, Shonai and Kanto basins; see Fig. 1).