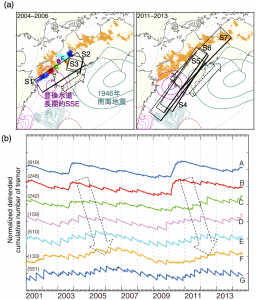 We report on two small long-termslow slip events (SSEs) within a gap between tremor and locked zones in the Nankai subduction zone, southwest Japan. The SSEs were detected by subtracting the steady state component and postseismic effects of large earthquakes from long-term and high-density Global Navigation Satellite Systemdata. Both SSEs occurred in adjacent regions of the Bungo channel following long-term SSEs in the Bungo channel in 2003 and 2010. The estimated slip was 1–5 cm/year that lasted at least 1–2 years after 2004 and 2011, partly accommodating plate convergence. As the low-frequency tremor in the downdip region is activated at the same time as the Bungo channel long-term SSE, a spatiotemporal correlation was observed between the detected SSEs and long-term tremor activity in the downdip region. This correlation indicates along-dip interaction of the slips on the subducting plate interface.