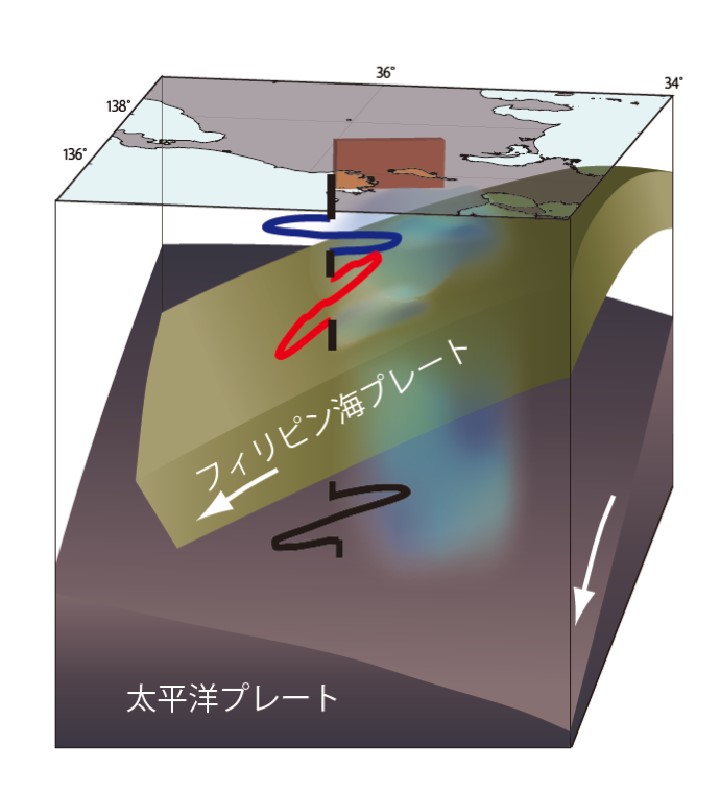 Takashi Iidaka, Yoshihiro Hiramatsu and The Research Group for the Joint Seismic Observations at the Nobi Area

Abstract
The 1891 Nobi earthquake was the largest historic intraplate earthquake in Japan. The rupture origin corresponds to a zone of high strain rate inferred from geodetic data. To understand the geologic setting of this event, we deployed temporary seismic stations in the area. Shear-wave splitting analysis was performed using data from temporary and permanent seismic stations, revealing significant lateral variations in polarization directions. Polarization directions of NE–SW, ESE–WNW, and ENE–WSW were observed in the northeastern, central, and southwestern parts of the study area, respectively. The NE–SW- and ENE–WSW-aligned polarizations are consistent with the subduction directions of the Philippine Sea plate and Pacific plate, respectively; thus, shear-wave splitting in the northeastern and southwestern regions of the study area is likely caused by mantle wedge anisotropy, a consequence of mantle flow caused by the subducting oceanic slabs. However, the ESE–WNW orientations observed in the central Chubu Region are inconsistent with the subduction direction of either slab. Regions of low seismic velocity and low resistivity have been reported in the inferred position of the mantle wedge; these heterogeneities are thought to be caused by fluid rising from the dehydrated oceanic slabs. Thus, the ESE–WNW polarization in central Chubu could be a consequence of structural heterogeneities created by fluid to the crust from the mantle. The presence of crustal fluid is closely related to weakening, and the faults responsible for the 1891 Nobi earthquake are located just above the anisotropic region. Because fluids in the crust weaken the surrounding rock, this could explain the occurrence of the 1891 Nobi earthquake.