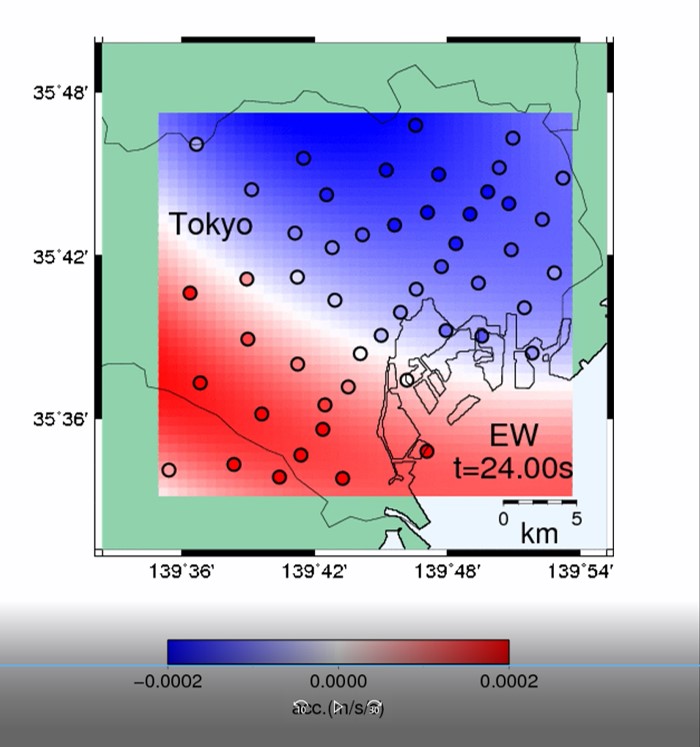 Abstract
Long-period ground motions due to large earthquakes can cause devastating disasters, especially in urbanized areas located on sedimentary basins. To assess and mitigate such damage, it is
essential to rapidly evaluate seismic hazards for infrastructures, which can be simulated by seismic response analyses that use waveforms at the base of each infrastructure as an input ground motion. The present study reconstructs the seismic wavefield in the Tokyo metropolitan area located on the Kanto sedimentary basin, Japan, from seismograms of the Metropolitan Seismic Observation network. The obtained wavefield fully explains the observed waveforms in the frequency band of 0.10–0.20 Hz. This is attributed to the seismic wavefield imaging technique proposed by Kano et al. (2017), which implements the replica exchange Monte Carlo method to simultaneously estimate model parameters related to the subsurface structure and source information. Further investigation shows that the reconstructed seismic wavefield lower than 0.30 Hz is of high quality in terms of variance reduction, which quantifies a misfit in waveforms but that the variance reduction rapidly worsens in higher frequencies. Meanwhile, the velocity response spectra show good agreement with observations up to 0.90 Hz in terms of the combined goodness of fit, which is a measure of misfit in the velocity response spectra. Inputting the reconstructed wavefield into seismic response analyses, we can rapidly assess the overall damage to infrastructures immediately after a large earthquake.