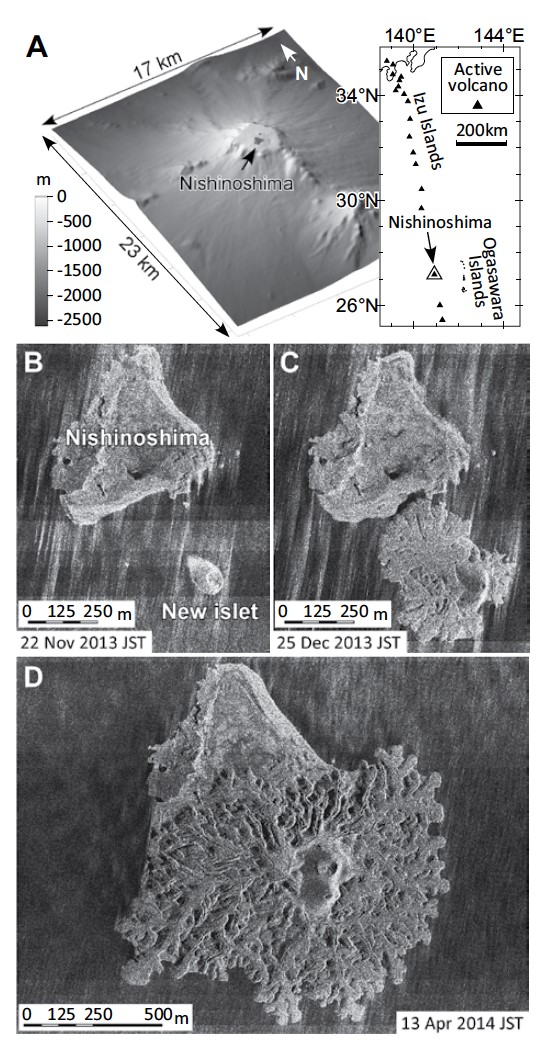 ABSTRACT
We investigated the creation of a volcanic islet and emplacement of lava flows in the sea by analyzing data from the island-forming eruption at Nishinoshima, Japan, that has been continuing since November 2013. Aerial observations and satellite images were used to perform a quantitative analysis of the eruption processes. The most intriguing characteristic of the lava flows is the development of lobes and tubes from breakouts and bifurcations of andesitic ‘a’ā-type lava flows. Internal pathways that fed lava to the active flow front were eventually developed by crust solidification and dominated the lava transport. The average discharge was ~2 × 105 m3/day, and the total volume of erupted material reached ~0.1 km3 at the end of February 2015. Fractal analysis of the lava-flow margins suggests that the growth pattern is self-similar, with a fractal dimension (D) of ~1.08–1.18, which is within the range of subaerial basaltic lava flows. The morphological evolution of Nishinoshima is controlled primarily by effusion of lava with an apparent viscosity of 104–106 Pa∙s, average discharge of ~2.3 m3/s, and eruption duration lasting ~2 yr. Our data and analyses suggest that the effect of lava coming in contact with seawater, as well as the variations in the lava discharge rateon local and overall scales, are important factors affecting the development of crust and the lava transport system.