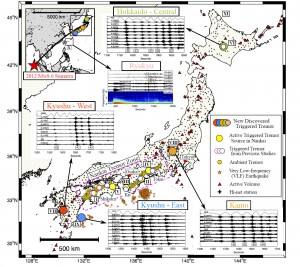 Tectonic tremor, an extremely stress-sensitive seismic phenomenon occurring in the brittle-ductile transition section of a fault, is associated with the shearing mechanism of slow slip. Observations of triggered tremor can facilitate the evaluation of the existence of background ambient tremor and slow slip events. This paper presents widespread triggered tremor sources in Japan initiated by the surface waves of the 2012 Mw8.6 Sumatra earthquake on strike-slip and thrust faults, in the deep volcanic low-frequency earthquake active area, in the shallow tectonic tremor and very low-frequency earthquake active regions, and in the subduction zone. In most regions, the amplitudes of triggered tremor are generally logarithmically proportional to the dynamic stress caused by various triggering earthquakes. Our observations suggest that triggered tremor in the newly discovered sources is the result of a more rapid rate of background ambient tremor, and evidence has suggested the existence of ambient tremor in some regions.