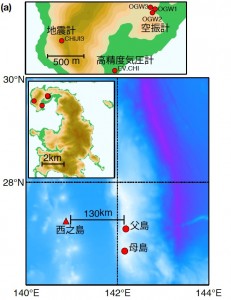 SUMMARY
On 2013 November 20, a submarine eruption started close to Nishinoshima island, which
lies ∼1000 km south of Tokyo. Real-time monitoring of the eruption is crucial for understanding the formation processes of the new volcano island and related disaster prevention. In situ monitoring, however, is difficult in practice because the closest inhabited island, Chichijima, is 130 km away from Nishinoshima. This study presents an infrasonic monitoring method that uses cross-correlating records at a pair of online stations on Chichijima. One is the horizontal ground velocity recorded at a permanent seismic station operated by the Japan Meteorological Agency (JMA). The seismic records were corrected for atmospheric pressure using an empirical ground response to infrasound. The other is the air pressure recorded at the JMA Meteorological Observatory. For each station, we divided the whole records into 3600-s segments. To suppress outliers, each segment was normalized by the envelope function. We then calculated cross-correlation functions between the pair of stations using the fast Fourier transform. They present clear successive arrivals of infrasound coming from Nishinoshima.
We also conducted an offline tripartite-array observation using three low-frequency microphones with a station spacing of ∼50 m installed in 2013 May. The array analysis supports the results obtained from the online stations. The typical root-mean-squared amplitude is on the order of 0.01 Pa, and the typical duration is several days. The amplitudes were primarily controlled by the effective sound velocity structure from Nishinoshima to Chichijima. The infrasonic observations together with the meteorological observation at Chichijima suggest that infrasonic activity was not present in the first two weeks in 2015 January. With the help of a more quantitative estimation of the meteorological effect, we could infer eruptive activity in real time. Now many online seismic stations are available worldwide. This study shows that installation of another infrasonic sensor close to the existing seismic station (∼1 km) is useful for monitoring a remote island volcano in real time.