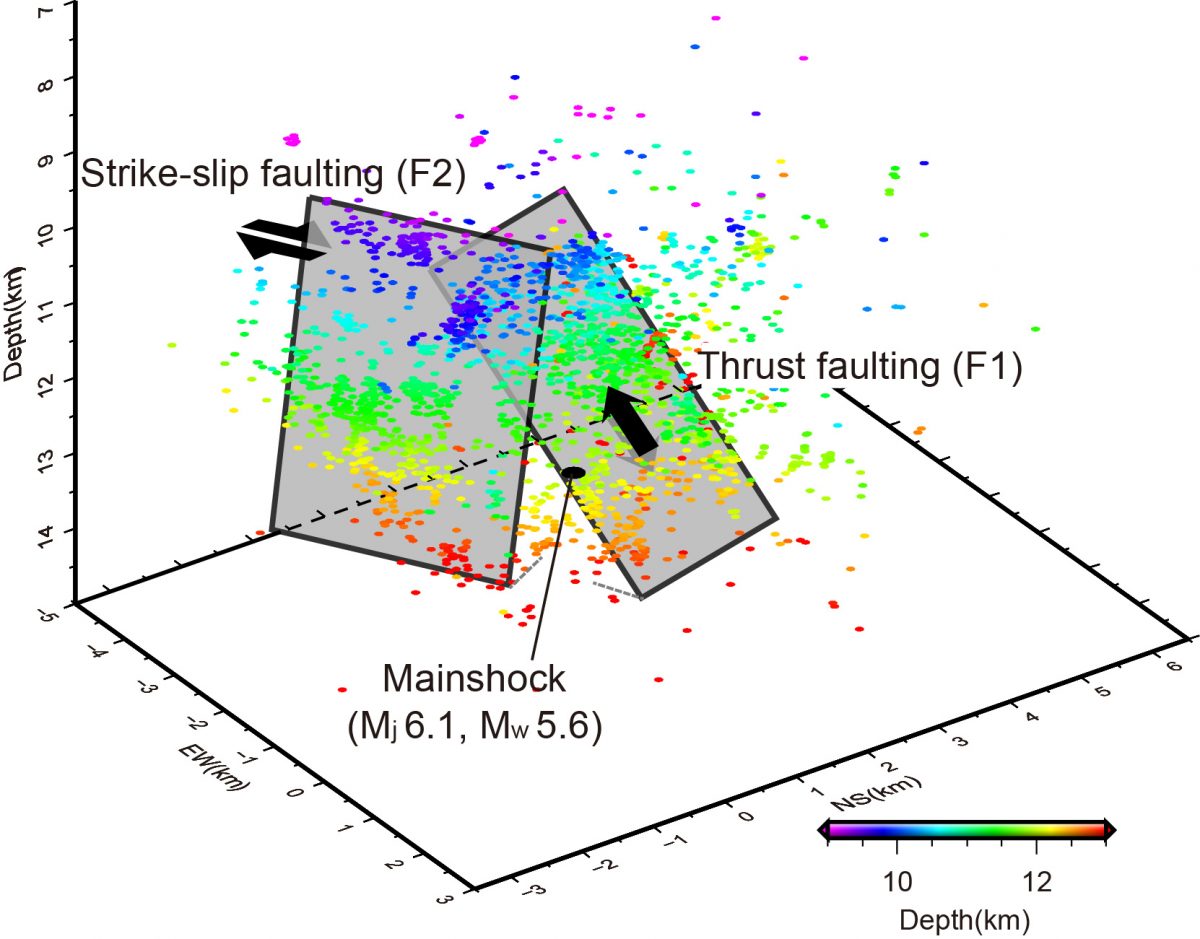 We reconstructed the spatiotemporal evolution of seismicity associated with the 2018 Mw 5.6 northern Osaka earthquake, Japan, to discuss the source fault model of the mainshock rupture, the possible link between this rupture and known active faults, and subsequent crustal deformation. We first relocated the hypocenters listed in the earthquake catalog determined by the Japan Meteorological Agency using a double-difference relocation algorithm. We then searched for the earthquake waveforms that closely resembled those of the relocated hypocenters by applying a matched filtering technique to the continuous waveform data. The relocated hypocenters revealed two distinct planar alignments with different fault geometries. A combination of the relocated hypocenters and focal mechanisms suggests that the mainshock rupture initiated on a NNW–SSE-striking thrust fault, dipping ~ 45° to the east, with the rupture propagating to an adjacent sub-vertical ENE–WSW-striking strike-slip fault ~ 0.3 s after the initial mainshock rupture, resulting in the simultaneous propagation of dynamic rupture along the two faults. The strike-slip fault is oblique to the strike of the Arima-Takatsuki Fault, indicating that blind strike-slip faulting occurred. While the east-dipping thrust fault is located deeper than the modeled extent of the Uemachi Fault, a simple extrapolation of the near-surface geometry of the Uemachi fault partially overlaps the mainshock rupture area. Although it is unclear as to whether a blind thrust fault or a deep portion of the Uemachi Fault ruptured during this mainshock–aftershock sequence, a mainshock rupture would have transferred a static stress change of > 0.1 MPa to a portion of the east-dipping thrust fault system. Intensive aftershocks have persisted along the northern and southern edges of the source area, including moderate-magnitude events, whereas the seismicity in the central part of the source area has shown a rapid decay over time. Delayed triggered aftershocks were clearly identified along the northern extension of the rupture area. Because the background seismicity is predominant in this northern area, we interpret that aseismic deformation, such as cataclastic flow lubricated by crustal fluids, triggered this off-fault seismicity.