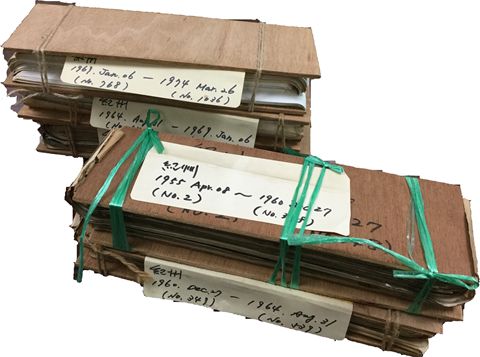 Abstract
Recent geodetic measurements have detected recurrent slow slip events (SSEs) in many subduction zones. Numerical simulations suggest that the recurrence intervals and magnitudes of such SSEs decrease in the later stage of the interseismic period. Therefore, activities of SSEs and their temporal variations in recurrence intervals and magnitudes provide important clues for evaluating future large earthquakes. However, our knowledge of recurrent SSEs before the establishment of dense observation networks is limited. Here, we report a possible SSE in 1973 beneath the Kii peninsula along the Nankai subduction zone, southwest Japan, where magnitude 8 class earthquakes such as the 1944 Tonankai and 1946 Nankai earthquakes repeatedly occur. The possible SSE was detected by a horizontal pendulum tiltmeter installed in 1947 at the Kishu observatory. We recovered and converted the original tilt records from 1969 to 1974 drawn on bromide (light sensitive) papers to digital tilt records. In late-November 1973, there was a slow transient signal down to the northeast of about 1.4 μrad, lasting about 1–3 days. Assuming this crustal deformation was due to an SSE, we searched for a possible fault model by adopting the already-known SSE models occurring from 1996 to 2012 as template models. Among the 42 template fault models, five models were able to qualitatively explain the direction of the observed tilt change. The centroids of these fault models were located about 30–60 km to the west of the observatory. In the source region, two magnitude 5 class earthquakes occurred before the initiation of the transient signal, and thus may be related to the occurrence of the possible SSE. In contrast, the magnitude of the calculated tilt change was about 1–2 order smaller than that of the observed tilt change. This discrepancy could be partly explained by a slip amount larger than that in the template models, which suggests that the possible SSE in 1973 was larger than those detected by recent observations. Further investigation of historical data on crustal deformation will reveal more about the temporal change in the recurrence intervals and magnitudes of SSEs during earthquake cycles of large earthquakes.