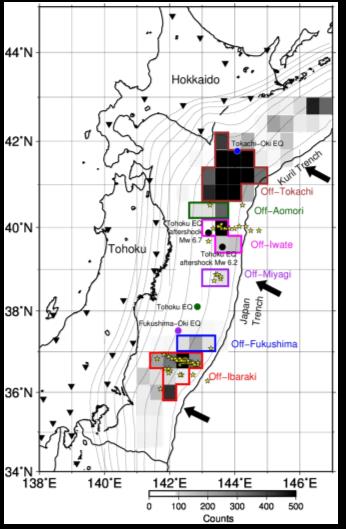 The activity of very low frequency earthquakes (VLFEs), classified as one type of slow earthquake, can reflect the spatiotemporal distribution of interplate slip. We investigated VLFE activity off the Hokkaido and Tohoku Pacific coasts from January 2003 to July 2018. VLFEs were activated by afterslips of large earthquakes, that is, the 2003 Tokachi-Oki earthquake (Mw 8.0) and the 2011 Tohoku earthquake (Mw 9.0). Inside a large coseismic slip area of the 2011 Tohoku earthquake, the VLFE activity was low thereafter. Episodic bursts that occurred every three months to a year and were observed in large coseismic slip areas of very large earthquakes may indicate small slips during an interseismic period between very large earthquakes.