コンテンツへスキップ
Stress loading and the occurrence of normal-type earthquakes under Boso Peninsula, Japan 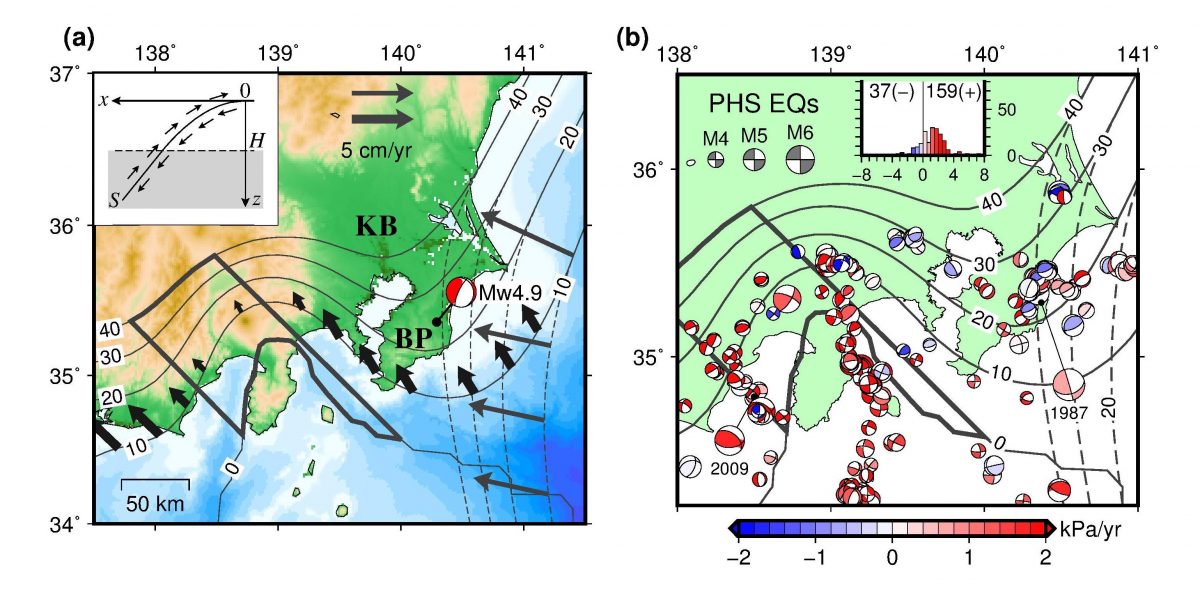 Boso Peninsula, Japan, was formed by the interaction of the Philippine Sea, Eurasian and Pacific plates around the trench–trench–trench Boso triple junction. Normal-type earthquakes are persistently observed in the subducting Philippine Sea slab under the peninsula at a depth of ~ 30 km, including a recent (2019) Mw 4.9 earthquake which caused shaking throughout the Kanto region (greater Tokyo). Such shallow intraplate earthquakes are potentially hazardous to this heavily populated region, yet their mechanism is poorly understood, especially in the context of a three-plate system. Here, we calculate stress rates in the Philippine Sea slab and the surrounding area, using a subduction model constructed in a previous study, to explain the generation of the regional stress field and its effect on earthquake occurrence. In general, the calculated stress rates under Boso Peninsula are horizontally extensional both above and below the Eurasian–Philippine Sea plate interface. We apply our calculated stress rates to the nodal planes of the observed earthquakes to calculate the Coulomb failure function (ΔCFF). These calculated ΔCFFs are generally positive on normal-type earthquakes under Boso. The ΔCFFs are also consistent with earthquakes in adjacent areas that are seismically active, for example, in the Philippine Sea plate to the south, in the collision zone around Izu Peninsula, and in the cluster in the Eurasian plate northeast of Boso Peninsula, which further supports our stress loading model. Calculation of the individual contributions of Philippine Sea plate and Pacific plate subduction shows that the development of the stress field around Boso is dependent upon contributions from both subducting plates. In contrast, the arc–arc collision at Izu Peninsula has little influence.

Figure Caption (a) Landforms around Boso Peninsula (BP) and the Kanto Basin (KB). Solid contours map upper surface of PHS plate, and dashed contours, upper surface of PAC plate. Focal mechanism marks location of Mw 4.9 normal-type earthquake of 2019/05/25. Inset: Schematic illustration of internal structure and slip distribution of our model in vertical section perpendicular to the trench. (b) Focal mechanisms for earthquakes distributed in PHS plate, from 2003/1/1 to 2019/9/30. Focal mechanisms are colored with respect to ΔCFF. Distribution of earthquakes with positive (+) and negative (−) ΔCFF shown in histograms.