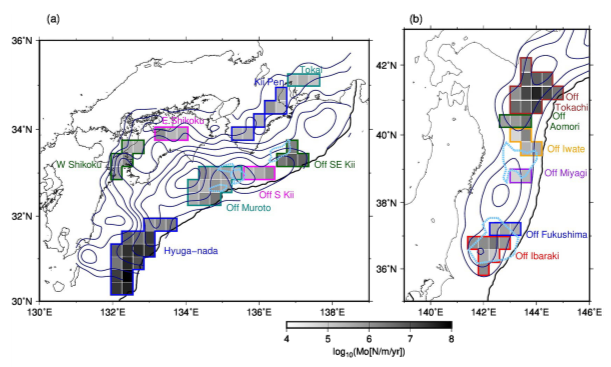 Along subducting plate boundaries, slow earthquakes are mainly distributed in the vicinity of large slip areas of huge regular earthquakes. Characteristics of slow earthquakes suggest that their frictional conditions at plate boundaries differ from those of regular earthquakes. We detected very low frequency earthquakes (VLFEs), classified as one type of slow earthquakes, around Japan because their activity can be related to interplate coupling. The VLFEs along the Nankai Trough are distributed in the offshore areas in the depth ranges of 5–10 km (shallow VLFEs) and in the inland areas in the depth ranges of 30–40 km (deep VLFEs), whereas VLFEs off Tohoku are distributed only in the offshore (shallow) areas. The distribution of the shallow VLFE activity is more complicated along trench axes than deep VLFE activity. This suggests that the along-strike heterogeneity of the frictional properties is stronger in the shallow part than in the deep part of the plate boundary. Furthermore, the shallow VLFE activity shows an anticorrelation relationship with the spatial distribution of the interplate coupling ratio. Shallow VLFEs occur mainly in the area where seismic velocity is low; therefore, shallow slow earthquakes can be triggered by the high pore fluid pressure within weak interplate coupling zones.