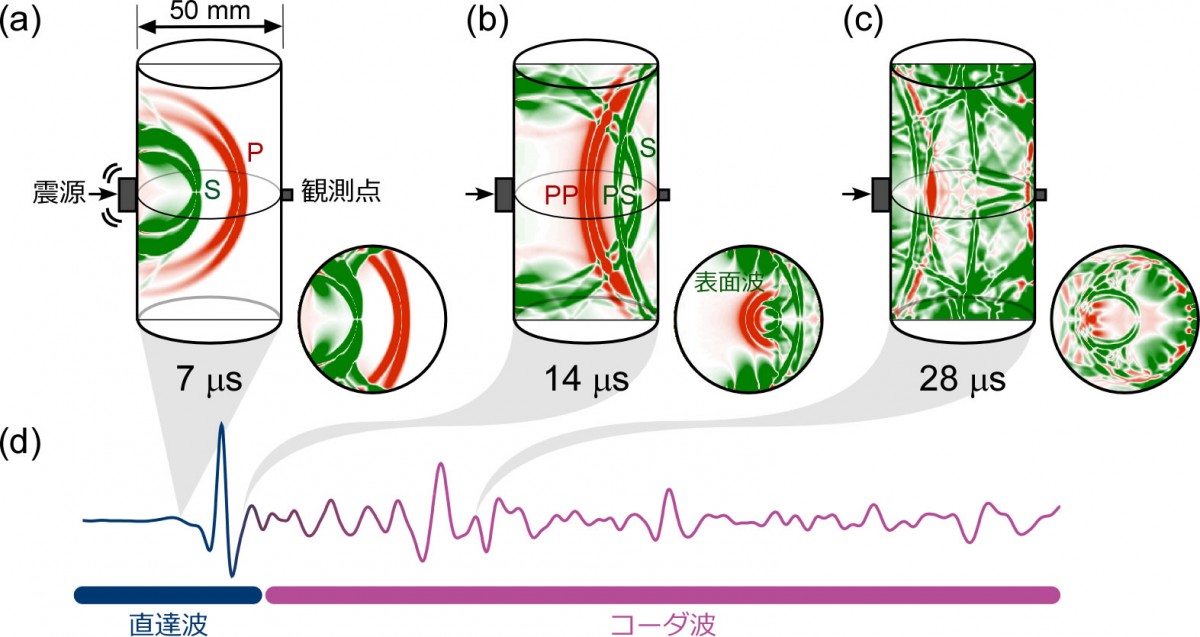 The coda part of a waveform transmitted through a laboratory sample should be examined for the highresolution monitoring of the sample characteristics in detail. However, the origin and propagation process of the later phases in a finite-sized small sample are very complicated with the overlap of multiple unknown reflections and conversions. In this study, we investigated the three-dimensional (3D) geometric effect of a finite-sized cylindrical sample to understand the development of these later phases. This study used 3D finite difference method simulation employing a free-surface boundary condition over a curved model surface and a realistic circular shape of the source model. The simulated waveforms and the visualized 3D wavefield in a stainless steel sample clearly demonstrated the process of multiple reflections and the conversions of the P and S waves at the side surface as well as at the top and bottom of the sample. Rayleigh wave propagation along the curved side boundary was also confirmed, and these waves dominate in the later portion of the simulated waveform with much larger amplitudes than the P and S wave reflections. The feature of the simulated waveforms showed good agreement with laboratory observed waveforms. For the simulation, an introduction of an absorbing boundary condition at the top and bottom of the samplemade it possible to efficiently separate the contribution of the vertical and horizontal boundary effects in the simulated wavefield. This procedure helped to confirm the additional finding of vertically propagating multiple surface waves and their conversion at the corner of the sample. This new laboratory-scale 3D simulation enabled the appearance of a variety of geometric effects that constitute the later phases of the transmitted waves.